In June 2015 I decided to start using a moth trap to see what night flying moths were frequenting our meadow and garden at night.  The high cost of buying a trap (between £165 and £350), together with their relatively simple design, made me decide to build my own.  There then followed much research on the Internet about the best type to build and this, together with suggestions and advice from the Yahoo UK Moths Forum and my own ideas, I decided to build a Skinner moth trap.

I will publish details of how I made the trap soon, but in the meantime here is a photograph of it.  It is rather difficult to photograph so as to show the plastic sheets.  I have used two conventional Skinner sloping sheets resting on two vertical short sheets each side of the opening (to help prevent captured moths escaping), and four vertical sheets (baffles) above the sloping sheets (two in each direction) to help guide flying moths into the trap.  The bulb is a mercury vapour (MV) 125W used with ballast control gear and I have added a three-pin socket and on/off switch (left side of the trap in the photograph).

I put the trap trap out for the first time during the night of 24/25 June.  I placed it on a bench seat on the edge of our one acre wild-flower meadow (photographs on right) and switched it on about 11pm.  When I checked it at 6.15am the following morning I found about 40 moths of 25 different species - not bad for a first attempt I thought.

I also put the trap out on the nights of 25, 26, 28 and 29 June in different places on our 2½ acres and each night, particularly 28 and 29 when I put the trap close to hedges and trees, caught more different species.  I am encouraged by this early success with the trap, especially as it has only cost me £45 to build!

I have now started trying to identify the moths, but anticipate this is going to be difficult to start with as my experience of moth identification has so far been restricted to day flying moths. 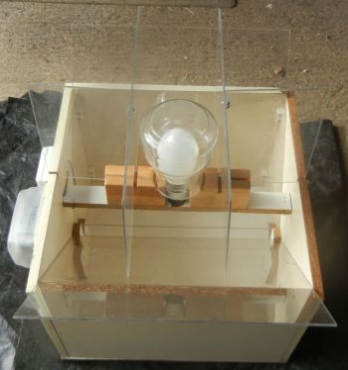 I need your help please to identify these moths that I have seen - thanks.

These are day flying moths seen in our meadow that I haven’t been able to identify yet (click on image to enlarge it).  If you know what they are, please tell me by sending an email to <chris@g4bue.com> or use the contact form on the home page (top left menu) - thanks.

Below are some of the day flying moths seen in our wild-flower meadow since 2012 (click on image to enlarge it). 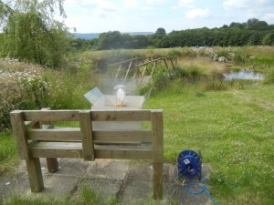 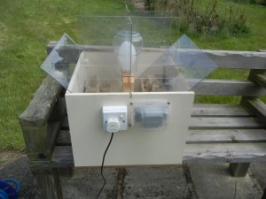