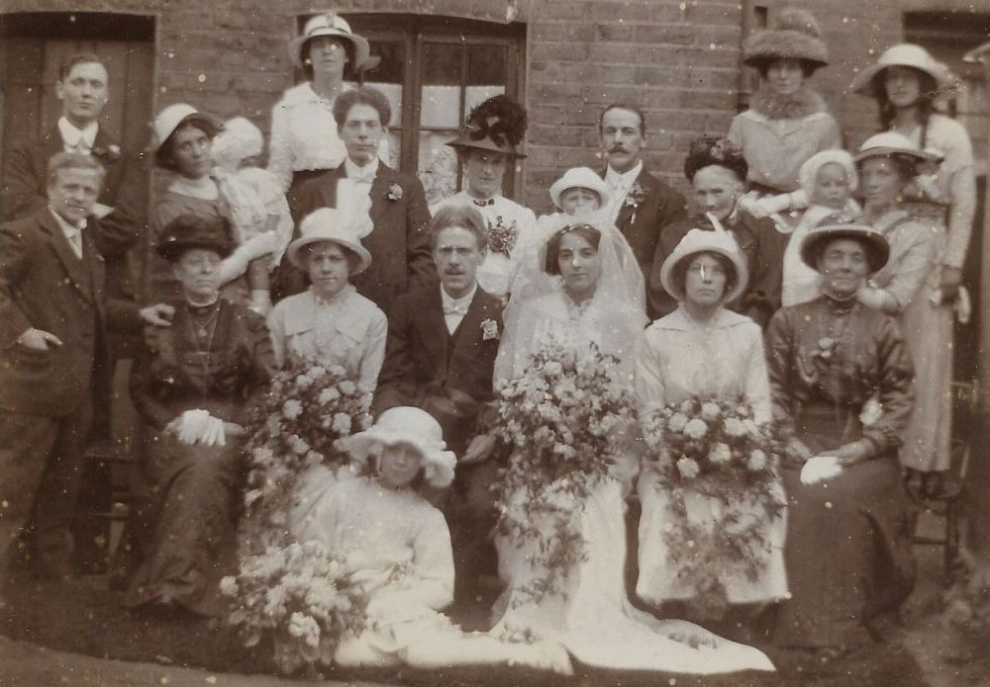 This is the formal wedding photograph of my maternal grandparents on 15 August 1914 at South Hackney Parish Church, London.  My grandfather was Percy John HARRIS, born 21 June 1889 at Hackney, London and my grandmother was Florence Maud LOADER, born 22 October 1889 at Poplar, London.  I am trying to identify the other people in the photograph and wonder if there was a tradition at that time as to where the various relatives were positioned in relation to the bride and groom?

I think the two older ladies sitting on the ends of the bride and groom's row could be their mothers, who were both widows in 1914, but would the bride's mother be sat next but one to her and likewise the groom's mother next but one to him, or the other way round?  I assume the ladies each side of the bride and groom, and sitting in front, with the bouquets were the bridesmaids?  Are the groom's family likely to be those standing behind on his side of the photograph, and likewise the bride's family standing beind her?

This is part of an image from UK Incoming Passenger Lists for the Missanabie that sailed from Montreal, Canada to England, arriving at Liverpool on 9 August 1915. I am trying to decipher the christian name of the girl in the second entry from the bottom. The surname is CACKETT and her mother, Edith CACKETT and father, Arthur CACKETT, are shown in the entries above.