The weather station was closed down in March 2021 when we moved to Bexhill-on-Sea.

Gay Street Weather was set up at the beginning of 2014 to record the weather in the hamlet of Gay Street, near Pulborough, West Sussex, between the villages of Nutbourne and West Chiltington.  The weather station is a Davis Vantage Pro2 Plus (with UV and solar radiation sensors) set up on 14 August 2016 in a meadow adjacent to our house (pictured left) and updates to the Internet 24/7.  It has the Daytime Fan-assisted Radiation Shield kit installed to help reduce the effects of daytime radiation and increase the accuracy of the temperature and humidity readings.  The unit is installed five feet above ground on a seven feet mast with the anenometer at the top, eight feet above ground (close-up pictured right).

The secondary station is the Fine-Offset WH3080  set up on 7 January 2014, also in the meadow, between the Davis station and my house. The sensors and anenometer are on a five feet mast (pictured top far right) and the rainfall gauge on the ground.

Cumulus software is used with a wind speed multiplier of 1.316 to equate readings to the 10 metres high standard, and barometric pressure readings are adjusted to sea level.

Gay Street Weather also reports to the UK Meteorological Office’s Weather Observations Website (WOW).  The Meteorolog-cal Office is helping to co-ordinate the growth of the weather observing community in the UK, by asking anyone to submit the observations they are taking.  This can be done using all levels of equipment either manually or automatically for users who own a compatible Automatic Weather Station (AWS) like Gay Street Weather.

To see Gay Street Weather on the Wunderground website

To see the current weather data

To see the actual weather at Gay Street now (webcam)

To see an animation of wind in North Atlantic (including UK). 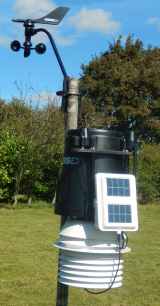 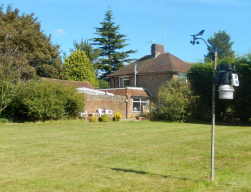 To see Gay Street Weather on the WOW website

Below is a quick overview of the most important seeing weather variables for the next night at Pulborough.